The impact of marsh frogs

Have you heard this call?

If you have please log your record at the Record Pool

Behaviour
Marsh frogs stay in or around water all year and tend to sunbathe on the sunny banks of ponds or on submerged vegetation [1]. The photos above and below are classic marsh frog poses. This behaviour differs from native frogs and toads that tend to leave ponds after spawning in February and March [*].  Therefore, if you see a frog behaving in this way between April and September it is very likely to be a marsh frog or a close relative (see below in More about marsh frogs).

Call
Male frogs have a very loud and distinctive call. It often consists of repeat bursts of five rapid quack-like sounds that have been compared to a laugh or cackle [1]. Marsh frogs call both day and night from late spring sporadically throughout the summer.
Size
Marsh frogs can grow to 13 cm or more [1], much larger than native frogs and toads.
Skin
Their skin is warty, with folds of skin running from their eyes down either side of their back. This distinguishes marsh frogs from another non-native the North American Bullfrog (Lithobates catesbeianus).
Colour
This can vary between green, brown or grey, but marsh frogs are often more vivid green than native frogs and toads [2].
Vocal Sacs
Male marsh frogs have grey vocal sacs either side of their head that inflate when calling[2].
Please Remember
Unfortunately, section 14(1) of the Wildlife and Countryside Act 1981 makes it an offence for anyone to release marsh frogs back into the wild once they have been captured; so please only observe and listen to them.


[*] A native toad called the natterjack toad (Epidalea calamita) can spawn in ponds until July. However, natterjack toads are fairly rare, much smaller than marsh frogs and prefer shallow sandy bottomed ponds so they are unlikely to be mistaken for marsh frogs.


More about my research


Why is this research important?


The common frog (Rana temporaria) has suffered declines in the countryside and only remains widespread because of its ability to thrive in urban and suburban garden ponds [3]. The introduction of the marsh frog (Pelophylax ridibundus) in Kent and Sussex may have accelerated the common frog decline in this region. Although the decline of common frogs in Kent and Sussex has coincided with the introduction and proliferation of the marsh frog, factors other than marsh frogs may be the cause.

Possible mechanisms of impact
This may be as simple as…


Marsh frogs are known to prey on other amphibians [4]. Despite different habitat preferences marsh frogs are found in habitat suitable for common frogs so predation may occur. However, it is not known whether this is likely to significantly impact common frogs.

Or other species may also be involved… 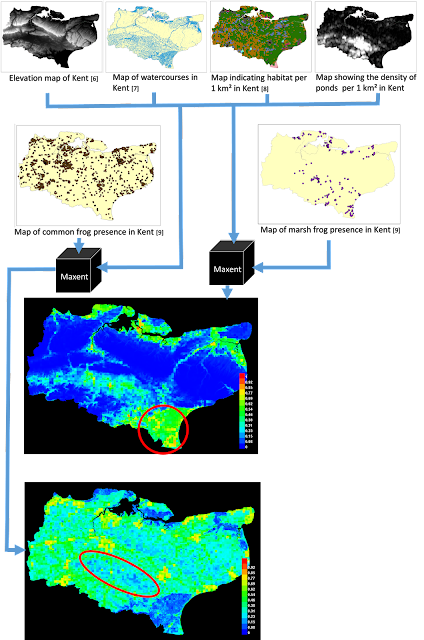 The results show that there is a separation between the distribution of marsh frogs and common frogs. The majority of this pattern is likely to be due to differences in habitat preference between the species. Marsh frogs are very aquatic frogs and stay close to water. Lots of the areas of Kent which have a high density of watercourses are classified as arable and horticultural land (e.g. the red circle).

Common frogs are more terrestrial so they may be less tolerant of arable and horticultural land. The area indicated by the red ellipse of the common frog SDM is not dominated by arable and horticultural land and has a high pond density making it suitable habitat for amphibians. So why is this area predicted as being less suitable for common frogs? Are marsh frogs spreading into high pond density areas and reducing common frog numbers?

At a local scale repeat amphibian surveys were conducted in areas where marsh frogs were present (Kent) and where they were absent (Sussex). Survey ponds were chosen to be in areas with habitat suitable for both species as predicted by the SDMs and ground truthing. 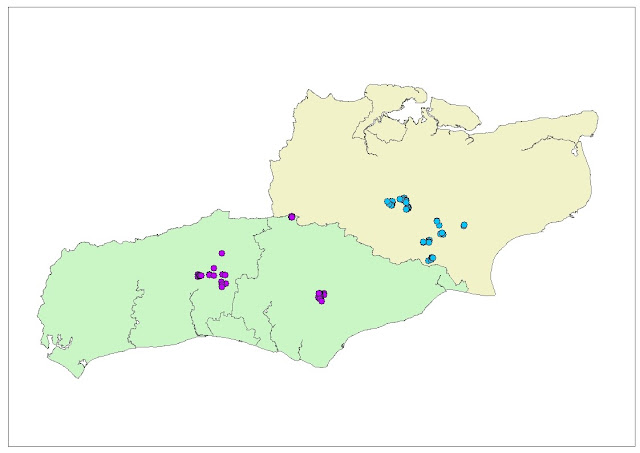 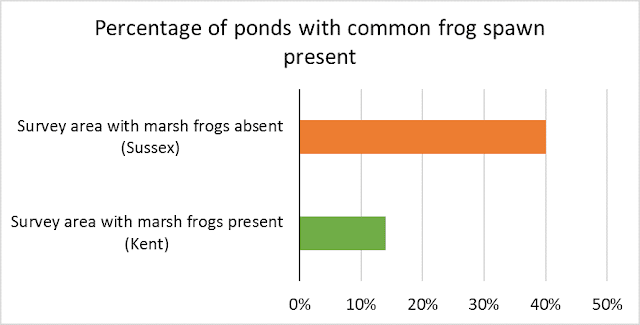 Less than half the ponds in areas with marsh frogs had common frog spawn present.

However, another common frog predator may be involved… 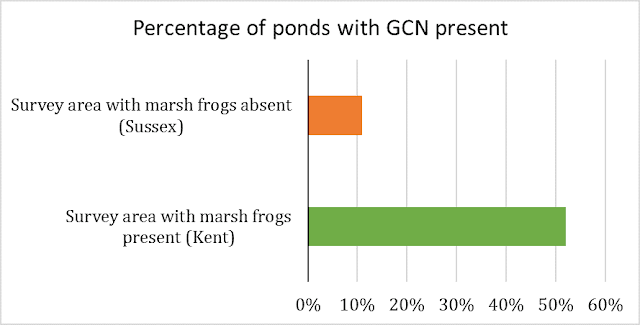 Relatives of the marsh frog

The marsh frog is part of a group of frogs called ‘green frogs’ or ‘water frogs’ and other members of this group are present  in the UK e.g. pool frog (Pelophylax lessonae) and the edible frog (Pelophylax kl. esculentus). There are a few differences between the species. Pool frogs are smaller, have white vocal sacs and a pale dorsal stripe (marsh frogs do occasionally have a dorsal stripe) [3]. Edible frogs are a hybrid cross between marsh frogs and pool frogs so tend to have features that are a mix of the two parent species. For example they are between the two in size and have light grey vocal sacs [1]. Unfortunately you can only reliably distinguish the different species by their call unless they are examined in the hand [3].

Edible frogs are rarely found without one of the parent species therefore it is only in areas where pool frogs exist that the presence of marsh frogs could be misidentified.  The pool frog was recently found to be native to East Anglia but became extinct in the 1990s and is being reintroduced to Norfolk [1]. There have been unmanaged introductions of pool frogs around the country and in Surrey you are more likely to find pool frogs or hybrid edible frogs than marsh frogs.

History of the introduction

In 1935, 12 marsh frogs, thought originally to be from Hungary, were introduced into gardens near Walland and Romney Marshes, Kent. Since then, the species has become abundant in the low-lying wetlands of the south eastern counties. However, most of the southern counties have small population and there are also records of sightings in the Midlands, as well as a water frog population in Yorkshire which may contain marsh frogs.


After their introduction marsh frogs spread rapidly along watercourses but their dependence on water has prevented natural colonisation of suitable habitat that is geographically separated .  Accidental or deliberate translocations are likely to be the cause of the occurrence of a new population. The map below shows the recorded distribution of marsh frogs in Kent and Sussex and illustrates the characteristic pattern of dispersal along rivers with smaller populations radiating from these. This is particularly evident around the River Ouse in East Sussex. 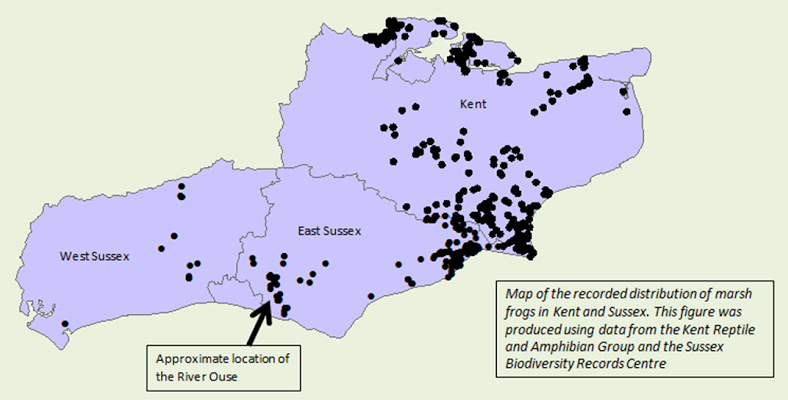 Although there have been several previous studies of marsh frogs in the UK, the influence that marsh frogs have on native species is still a matter of speculation and debate. Doubts regarding the negative effects marsh frogs may have on common frogs stem from the fact they have different habitat preferences. However, common frog declines have been linked to the presence of marsh frogs in ponds that are occupied by fish.

Marsh frogs may predate directly on common frog tadpoles and froglets, or there may be more complex competitive and predatory interactions involving the common frogs, marsh frogs and fish. Another possible interaction is with the grass snake (Natrix natrix), which feeds on frogs and has become very abundant in marsh frog areas.